From printers to fish tanks: how cyber-terrorists are finding back doors to hack into businesses 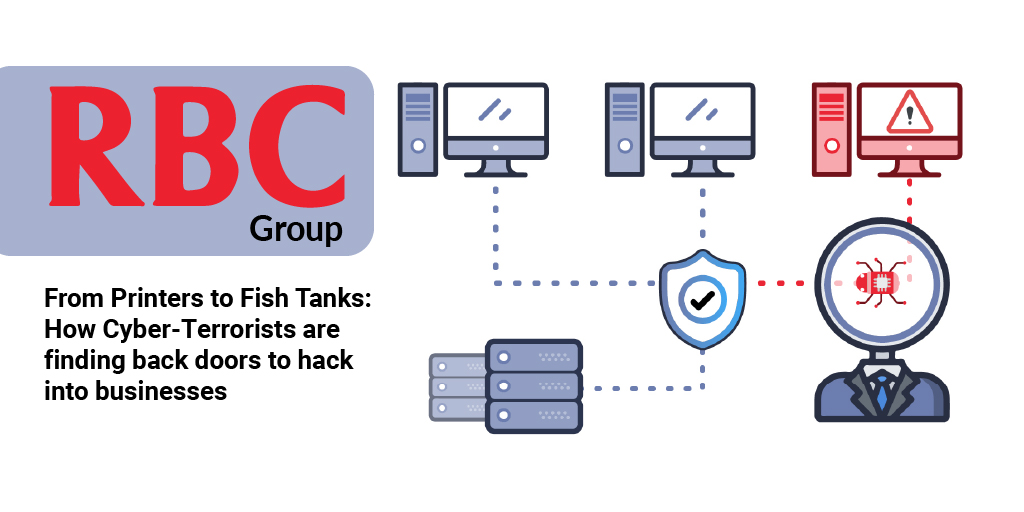 Hacker Back Doors Into Business Systems

‘Brute-force cyber-attacks’ powered by artificial intelligence are hacking into businesses at a rate of more than 200 million times a minute via the unlikeliest of office devices.

In the wake of the Landmark White data breach case and a host of other similar hacks, it’s becoming more obvious than ever that hackers are constantly seeking out new and cunning ways to gain access to data belonging to our businesses.

What many businesses aren’t aware of is, unsecured ‘end-points’ such as printers, phones, air conditioners, smart devices, and CCTV cameras are some of the main culprits – low-hanging fruit used by hackers to gain unauthorised access to businesses.

In the era of ‘The Internet of Things’ – with so many devices hooked up to the web – businesses are continually being hacked in ways we have never seen before.

Basically, anything connected to the internet with a network address is open to being breached, and hackers also have extremely powerful technologies at their disposal these days, including artificial intelligence (AI).

AI is capable of taking different combinations of your email address, user name, and password and making up to 200 million attempts to hack into your account in a single minute.

Weak passwords or a lack of complexity makes it even easier to crack unless they’re highly encrypted, long-winded, or extremely complex.

There is an astonishing example where a fish tank connected to the internet – to regulate temperature, food, and cleanliness – allowed hackers to gain access to a North American casino’s network so they could steal 10 gigabytes of data.

I’ve seen first-hand how hacking via these kinds of endpoints can bankrupt a business, and many companies are unfortunately learning the hard way by not securing their endpoints until it is too late.

Of all things, internet-connected printers are one of the most common ways for hackers to infiltrate business networks.

This is because today’s printers are much more than merely a printer, copier, or scanner. They are connected to the internet, essentially operating like computers – and this can leave businesses extremely vulnerable.

According to a recent review by HP, only 30 percent of businesses think printers pose a high risk of hacking to their company, so there is a lot of educating that needs to be done.

Printers often have access to usernames and passwords for every employee in the business, and sometimes additional credentials for accessing external platforms used by the business, such as Dropbox, Evernote or OneDrive.

Printers can be a gateway into businesses for hackers, and once they’re inside, they can have unfettered access to potentially all of a company’s private data.

Forward-thinking companies are heeding the warning from experts and upgrading their technology and security systems.

There’s no single silver bullet when it comes to protecting your business from hackers – it’s many different security strategies working together that need to be implemented.

Businesses can avoid being breached by conducting a thorough cybersecurity audit of your business and installing the most up-to-date technologies, document management systems and IT software, such as Docs2Me and Ip2Me, to implement security best practices.

It’s like thieves breaking into a house – if they are met with a home that is well fortified, they’ll move onto the next one in the hope of finding an easier target.

Like any house, you have many access points that need to be locked – front doors, side doors, or windows – and it’s the same with securing internet-connected endpoints in your business.

Want to ensure your network’s security? RBC Group can help you with that.